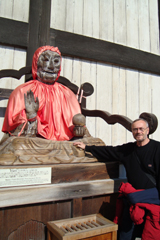 Secondary school: Pedagogical Lyceum, Leszno-1968; Studies: Military University of Technology-Warsaw, Faculty of Chemistry and Technical Physics, field of study - Technical Physics, specialization: Quantum Electronics, master's thesis - "Flat, laser, optimized heating of plasma with free edge with pre-compression" (supervisor - Prof. dr. hab. S. Kaliski), 1974; doctorate: "The influence of the phenomenon of diffusion and convection on the stability of crystallization fronts from the liquid phase of binary systems with different vapor pressure components" (promoter - Prof. M. Demianiuk), 1984; postdoctoral thesis - "Changing the properties of optoelectronic materials and devices under the influence of ionizing radiation", 2002; laureate of 5 awards of the Commander of the Military University of Technology and 2 Commandant of the Institute before 1995. In the years 1974-1982 he lectured on the Theory of Vibration, Quantum Mechanics, Group Theory, General Physics. A member of the scientific team who was the first to calculate the vibration resistance of the Warsaw Metro. In the years 1997-1999 lecturer of Optoelectronics (author's lecture). Commissioner of the exhibition of scientific achievements of the Military University of Technology (in 1994-97). In the years 2002-2003, a physics teacher in the High School for them. Gen. Maczka in Warsaw. From January 1, 2003, he was a research fellow at IF PS, and then IF ZUT in Szczecin. Since 2010, professor of physics. Author of over 500 scientific publications: scripts, articles, messages, scientific studies, patents and poems. Laureate of the West Pomeranian Nobel in the field of technical sciences, 2008 edition, Scientific PTF them. W. Rubinowicz 2014, awards for them R. Marcus 2016, West Pomeranian Nobel in the field of fundamental sciences, 2018 edition and the ZUT Rector's Award for the entirety of scientific achievements.

Participant of pedestrian rallies (R. Świerczyński). WAT team in athletics (high jump); vice-master. Starts in the II athletics league (A. Mirosz). Representation of the Faculty of Chemistry and Technical Physics in volleyball, basketball, handball and soccer (goal, A. Dzisiów). Editors of magazines: "Akademik" (secretary, editor-in-chief, consultant - 10 years), "Namiar" (Notebook of poetry of the poetic group "Namiar", whose poems were also printed: "Radar", "Soldier of Poland", "Poetry" and "Akademik", and were read at numerous meetings with authors, including in the club "Filharmonia" in Warsaw, W. Terlecki, in total there were seven notebooks (1973, 1974, 1975, 1976, 1977, 1978, the last in 1982, M. Majewski), "Kurierek" and Chronicles of the Scientific Society of Physicists and the Faculty of Chemistry and Technical Physics of the Military University of Technology .The organizer of the tournament for the WAT championship in ping-pong (under the patronage of "Akademika", A. Broniek). Founder of the Scientific Society of Physicists (2 years chairman) , 3 prizes for work in the Competition for the Best Non-program Scientific Work of the WAT Listener, J. Zieliński.) Educator of children on the colonies in Mława, organized by the Military University of Technology (Mokiejewski). Youth instructor at the camp in Koszęcin. Organizer and educator of children from education centers on the colony in Świder (C. Małyszko - Kaczmarek) and in the education centre in Prague (Środkowa 9). A graduate of a two-year pedagogical course (1974). Construction and commissioning of the LAZURYT black and white television set (1974).

Educator of a group of students (R. Zagórski, M. Kojdecki and G. Mielczarek graduated in parallel with mathematics at the University of Warsaw). Editor and consultant of "Akademik" and "Namiar" until 1979. WAT team in volleyball, basketball. Five lawsuits in 1983-1990. Third place with the volleyball team "AZS Piastów" in the Open Championships of Piastów on 3.V.2000 (M. Floryn). 1st place with volleyball team "Orły Piastów" in the Open Championships of Piastów on 3.V.2001 (J. Górski). Second place with the "Constans" team in the Volleyball Tournament for the BOHDAN SZEWCZYKA Memorial on February 23, 2002 (A. Ugniewski). Second place with the "Orły Piastów" team in the 50th anniversary of Piastów (J. Górski), on 04/28/2002. Third place with the volleyball team "Orły Piastów" in the Piast Volleyball League in the 2001/2002 season (J. Górski). Physics teacher and leader of the Physics Circle at the High School. Gen. Maczka (Paweł Moniewski, passing in 2003 at PW, obtained 100pkt / 100pkt from the Physics Exam, Marcin Pomorski passed in 2004 to Theoretical Physics of the University of Warsaw). Volleyball and badminton training in the Sports Hall at ul. Tenisowa and swimming at the Maritime College in Szczecin. A hardened cyclist - after crossing.